Give Me Liberty, or Give Me Truth

Thomas Christopher "Chris"  Parnell is an American actor, voice artist, comedian, and singer. He was a cast member on Saturday Night Live from 1998 to 2006 and played the role of Dr. Leo Spaceman on 30 Rock.

Narrator is an unseen character who first appeared in the new animated show, Reanimated History. 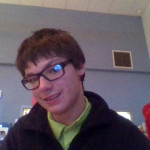